FKJ aka Vincent Fenton, was firstly sound engineer in cinemas before beginning his career in music. Music has always been a part of his life, indeed he started to compose songs at 13 and recorded his first track at 14, in his uncle’s studio. This self-taught man is also a multi-instrumentalist and mastered everything in studio and on stage. FKJ is an accomplished musician who plays the guitar, bass, saxophone, piano and many more.

FKJ was revealed in 2013 by his single ‘Lying Together’. Two EPs then followed this track - Time For A Change (2013) - encountered a big success and have introduced the artist to the public, which helped the second - Take Off (2014) - to cross borders and seduce an international public. Today, FKJ has sold EPs and performs everywhere across the world. Many world tours allowed him to play in Asia, North America or Europe and thus to expand his fanbase.

FKJ’s last Bangkok headline show was sold out, be sure to buy tickets in advance! 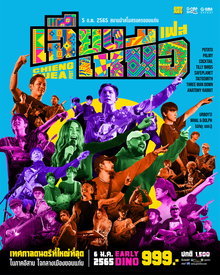